Jennifer’s love for North Andros began more than twenty years ago during a vacation to Nicholl’s Town. The beauty of the landscape, the warmth of the people and the diversity of the settlement left its mark. With this passion, she began her teaching career at Lowe Sound Primary and remained in North Andros for seven years. She is currently a veteran classroom teacher in Central Ohio and is actively involved in The Presbyterian Church of Johnstown, Ohio (former Elder), and serves as an acting Advisor for the Service Squad (a personal growth and service organization for dynamic students) at Johnstown Elementary. Her past leadership roles include a former President for the Child Conservation League in Johnstown and as an auction anchor supporting The Big Red Band travel endeavors. In the wake of Hurricane Matthew, in October of 2016, she and her husband Max, were compelled to form Friends of North Andros to provide outreach and strength to the people and communities of North Andros in their moment of greatest need. She is also a founding member of the Nicholl’s Town Music and Arts Festival that began in 1992.

Max Cartwright was raised in Nicholl’s Town, Andros, Bahamas. He was educated at St. John’s College in Nassau and was employed by Bahamas Electrical Corporation. In 2005, he relocated to Johnstown, Ohio. There he earned a degree in Hospitality Management from Columbus State Community College. He has extensive experience managing kitchens in hotel and hospital settings. Currently, he is the Food Service Director for Johnstown-Monroe Local Schools. Max’s love for his Bahamian people and island home bring meaningful perspective that helps to advance the goals of Friends of North Andros.

Kortney grew up in Nicholl’s Town, Andros, Bahamas and moved to Johnstown, Ohio following graduation from North Andros High School. In Johnstown, he became involved in the music, theater, and athletics and was a vibrant member of The Presbyterian Church of Johnstown.
While on the Johnstown High School’s football team, DePauw University recruited him to attend DePauw, where he lettered 3 out of his 4 years of football. Kortney’s academic accolades included membership in Phi Alpha Theta-history honorary, The William Wallace Carson Scholar Award-for scholarly work in History, and dean’s list distinctions. Upon graduation from DePauw, Kortney began his professional career in the IT services industry. He is currently employed at BCforward-the largest minority-owned business solution and staffing firm in Indianapolis, IN with over 6,000 employees, globally.  Within two years at BCforward, he was promoted to District Branch Manager, where he has assumed full responsibility of the organization’s Minneapolis office.
In his spare time Kortney enjoys traveling, sailing, and spending time with his family.

A native of Johnstown, Ohio, Jeff graduated from Johnstown-Monroe High School in 1987 and was appointed to the United States Naval Academy in Annapolis, Maryland. He graduated with a Bachelor’s of Science degree in General Engineering in 1991 and was assigned to flight training. He spent 23 years in the United States Navy as a Naval Flight Officer (Navigator) attaining the rank of Commander before retiring from the service in 2014. Throughout his career, he visited 38 different countries including a short training stint on Andros Island at the Atlantic Underwater Test and Evaluation Center in 1989. Additionally, he flew 52 combat missions over Bosnia-Herzegovina, Kosovo and Iraq. After his retirement from the US Navy, Jeff worked part-time as a defense contractor before joining Cardinal Health of Dublin, Ohio in February of 2016. At Cardinal, Jeff manages the credit card programs for the company and oversees the expense reimbursement process for employee travel. He currently resides once again in Johnstown and enjoys being outside in his spare time. Favorite activities include mountain biking, hiking and snow skiing. He has three children, Jacob, Olivia and Daniel.

Melanie is a PharmD, RPh, and a 2000 graduate of Ohio Northern University, Raabe College of Pharmacy.  She currently works in community pharmacy.  Melanie began traveling to the Dominican Republic in 2010 as a part of a medical mission to the village of Sabaneta de Yasica and surrounding areas in conjunction with the Iglesia Evangelica Dominicana.  The mission recently celebrated its 25th anniversary.  She sits on the steering committee to help further develop this partnership.  She is very active in the Presbyterian Church of Johnstown, participating in several choirs and as an Elder on Session.  In her spare time, Melanie enjoys traveling, crafting, teaching piano, and spending time with family and friends.

New to the mission service community, Melissa brings a long history of volunteerism and website development experience for a diverse group of not-for-profit organizations. In 2003, Melissa was appointed to the Ohio Environmental Review Appeals Commission, where she currently presides as chair. For several years, she’s been actively engaged in the Ohio Supreme Court’s Lawyer-to-Lawyer Mentoring Program. She also serves on Licking County’s Central and Executive Committees. Recently, Melissa became a licensed U.S. Rowing Referee, which means she can frequently be found on the water during the spring and fall regatta seasons. Melissa and her husband, Scott, have two children and live in Johnstown, Ohio. During her downtime, she enjoys coffee or sleeping, entirely dependent upon which is most needed at the moment.

To ensure the needs and voices of the next generation are at the forefront of FoNA’s endeavors, FoNA formed a Junior Board. Junior Board Members serve for three year terms and act as social ambassadors to the North Androsian Summer Exchange Students. Junior Board Members also serve as a vital and creative link to FoNA’s social media presence.

Noah Blair – Noah is a senior at Johnstown-Monroe where he serves on prom committee, is a member of the Big Red Band, and plans to play lacrosse this spring.  Noah is also a member of the Presbyterian Church of Johnstown where he is active in the teen bell and vocal choir, as well as the youth group.  After graduation Noah plans to attend West Virginia University and pursue a Bachelor’s Degree in Petroleum and Natural Gas Engineering. Noah’s trip to Andros left a lasting impression.  His best take-away from the trip was the generosity of all he met. The gratitude and loving spirit of the people of Andros left their mark. Noah serves as Junior Board Vice-President

Sidney Blair – Sidney attends Johnstown-Monroe HS, where she plays basketball, and this past season, her team went undefeated in its league, a school record. Sidney is very involved in the Presbyterian Church of Johnstown, serving in Youth Fellowship, Sunday School, and teen bells and choir. She also has been a member of Creme of the Crop 4-H Club for 8 years. Each year, after caring for livestock for 5 months, she takes her cow to the Hartford Fair to show and sell. The trip to North Andros had an enormous impact on Sidney. She was awed watching North Androsians face the devastation Hurricane Matthew left behind. The residents took on every challenge with courage, positivity, gratitude, and love. She feels blessed that she went to North Andros to give but returned having received so much more. Sidney can hardly wait to share the love and knowledge of this great island with her community in Central Ohio.  Sidney serves as Junior Board 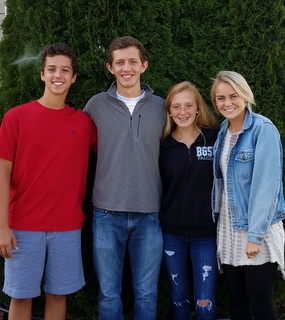 Victor Shilling – Victor is currently a student at Saint Charles Preparatory School and will graduate in 2019. In addition to focusing on academics and volunteer work, Victor is a varsity rower with Westerville Crew. During his trip to Andros, he found himself awed by how North Androsians expressed their gratitude that God had saved lives and given them an unwavering faith to rebuild their lives and communities. He now works to carry that spirit of gratitude and trust with him each day. Victor serves as Junior Board Secretary
Haley Trimble – bio coming soon
Leyna Varney – bio coming soon
Allison Zink – bio coming soon
Analise Zink – Annalise is a senior at Johnstown-Monroe HS and is a member of the Big Red Band, choir, varsity soccer, and the National Honor Society. She enjoys singing, acting, and spending time with my friends and family. Analise has been on several mission trips and has always felt inclined to serve the Lord outside her comfort zone. This past summer, God opened a new door for Analise, a chance to serve in North Andros. Having no clue at all what to expect, she took a step of faith and found herself at the hands and feet of Jesus in what felt like a whole new world. Seeing the pure joy and love for life the Bahamian people have while living with so little was truly amazing.  She will forever cherish what she learned and experienced on the island. Analise serves as Junior Board President